This is a well-known scripture in the Bible that speaks that we are called to live by faith, not by sight. Here, Paul described the assurance of the resurrection of every believer and nonbelievers.

Here, the word ‘walk’ means our conduct and behavior that we do after putting our faith in Jesus. In the Christian life, we cannot see the promises of Christ with our naked eyes. To view them we need to have faith and it will help us to walk with God in our earthly life.

Several times Jesus says that he came to earth to give us eternal life but many people do not believe him. As they cannot see the life after death that is why most of the people refuse the truth that Jesus preached in his time.

Human nature seeks to believe something until they experience that. When Jesus was resurrected, Philip did not believe that news until he touched Jesus with his own hands.

It is impossible to know the heavenly things to the natural man as they are spiritually discerned (1 Corinthians 2:14). To understand the things of heaven they need to believe in Jesus because he came down from there.

Jesus says that he came to give life abundantly (John 10:10). But it would be impossible to trust because none can tell what will happen after death. Only Jesus knows the things which will take place in the future days.

Jesus was the first man who was resurrected from his death and he proved that there will be a resurrection for everyone. He has promised us that we all will be like him and if we believe in him then we will see many unknown things which the people of this world will not believe.

Faith is the substance of things hoped for( Hebrews 11:1). In Christ, we have a high hope that we will reign with him in heaven. Though we cannot see heaven still we need to trust that as Jesus himself says so.

Faith drives us to walk in our spiritual journey and it always encourages us to believe the promises of God.

By faith, we can view the upcoming incidents that Jesus says. Without faith, we will be blind to see spiritual matters. The scripture says that without faith we cannot please God and we will be rewarded only if we believe him diligently seek him in our life( Hebrews 11:6).

To be successful in the race of Christian life one needs to have strong faith in God even when the surrounding circumstances will not allow him to be faithful in his determination.

By faith, we understand that the Lord created this earth and we also came to know that he sent Jesus to save us from eternal death.

Just simply believing Jesus is not enough to overcome the world. To defeat the world we require sufficient faith that assures us to trust in the Lord in every situation of life.

People Who Walked By Faith, Not By Sight

In the Bible, we can find many people who believed in God and walked by faith without seeing the future. We can know what happened to them at the end. They all were victorious in their journey of faith which took them more closer to God and finally they have ended their race and now they are eagerly waiting to receive their reward from the Lord.

Let us see how they walked by faith without knowing where God would take them.

Abraham was called a man of God who believed the Lord even when he did not know where the Lord was taking him. He lived with his family in a comforting city but when the Lord called him and told him that he will be the father of a great nation, immediately Abraham left his place and kindred.

He did not know what would happen in the days to come as he left everything behind. He just believed the Lord and walked according to his faith. Without seeing the future he decided to follow the Lord with his whole heart.

Even when he was unable to give birth to a son, the Lord kept his promises by allowing him to break the rule of nature. As a result of that, he received Isaac at his old age.

God has fulfilled all promises that he made to him. Abraham had experienced God’s amazing guidance and blessings throughout his life just by faith, not by sight.

The Lord asked Noah to prepare an ark for the deliverance of his family because only he and his family were righteous at that time. Noah did not know whether the rain would come or not but he believed God and acted according to his faith, not by the sight.

Because of his faith in God he and his family were saved from the severe rain that came and caused flood over the entire earth.

Esther was looked after by his cousin Mordecai in a foreign land where the Jews had no freedom. But she believed God and asked his people to fast and pray to the Lord.

God answered the prayer and the Jews were saved from the conspiracy of Haman. Esther did not know the future incidents but she walked by faith with God and her faith was victorious at the end.

Another great person who is remarkable for his faith in God. Joseph was sold by his brothers to the Egyptian traders. And he was also sent to prison for keeping himself away from adultery.

He had gone through many tough times in his life but he had a never-give-up attitude that helped him to hold his faith in God. He just believed in God and walked according to God’s righteousness.

He suffered, tortured by his own people but his faith led him to become the commander in chief of Egypt. He became the advisor of Egypt.  Thus, his faith guided him to achieve the promises of God.

To redeem Israel from the bondage of Egypt, the Lord called Moses in a miraculous way.

Even when he was not worthy to lead such a great nation, the Lord helped him to accomplish his task.

When Moses walked with God, he gained a huge faith that strengthened him to lead God’s people. He did not know how to deliver the children of Israel while they were standing before the Red Sea.

But he knew that when God called him, he would make the way for their deliverance. It was so according to his faith. God saved his people from the hands of mighty Egyptians by dividing the Red Sea and made them go through it.

Once Moses told God that he is not worthy to become a leader, but when he walked by faith, he saw a different story.

Joshua also had great faith in God,  and because of his faith, the Lord was with him. The wall of Jericho was collapsed due to the faith of Joseph.

Joshua had no knowledge about the future but he just believed God and worked according to his instructions. Eventually, he understood that God is faithful and he always keeps his words.

Rahab was a prostitute who lived in a city wall of Jericho. Her faith in God made her hide the spices of Israel from the king’s people. She heard the miraculous work of God and hearing those works of God she trusted him and also believed that she will be saved only if she trusts him.

While the entire city was burnt with fire and destroyed by Israel, Rahab and her family found grace in the sight of God. Thus she was saved from the wrath of God because she walked by faith. But To Us There Is But One God, The Father – 1 Corinthians 8:6 Meaning

“But to us there is but one God, the Father, of whom are all things, and we in him; and ...
Read More But Sanctify The Lord God In Your Hearts-1 Peter 3:15 Meaning

“But sanctify the Lord God in your hearts: and be ready always to give an answer to every man that ...
Read More Even when we have lost hope in our lives, God loves us and cares about us. When he created us, ...
Read More Philippians 1:6 “Being confident of this very thing, that he which hath begun a good work in you will perform ...
Read More Bible Verses For Encouragement And Comfort During Hard Times

The world where we are living today is a temporal place and very soon we shall leave it. But as ...
Read More 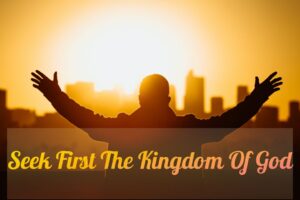 But Seek First His Kingdom And His Righteousness Meaning

Man has been attempting to fulfill his needs since the beginning of time, yet he has not been entirely successful ...
Read More 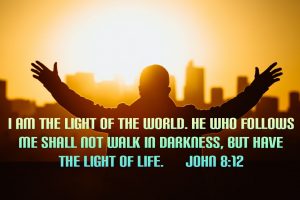 Bible Verse Meaning of John – 8:12 I Am The Light Of The World 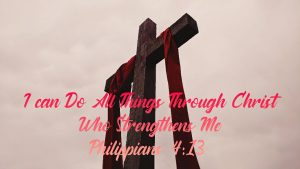 I Can Do All Things Through Christ Who Strengthens Me – Philippians 4:13 Meaning

I Can Do All Things We cannot do everything by our own strength. We are just mere human beings and ...
Read More 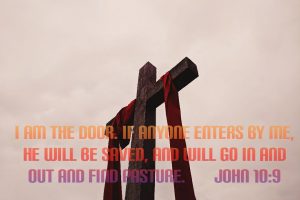 Bible Verse Meaning Of John 10:9 – I Am The Door If Anyone Enters By Me

I Am The Door The door helps us enter the house. Here, Jesus offered Himself as the door of heaven ...
Read More